Skip to content
The concept of client/server processing has emerged as a higher level of shared device processing typically found in Local Area Networks (LANs). In a shared-device LAN processing environment, PCs are attached to a system device that allows them to share a common resource – a file on a hard disk and printer are typical examples. 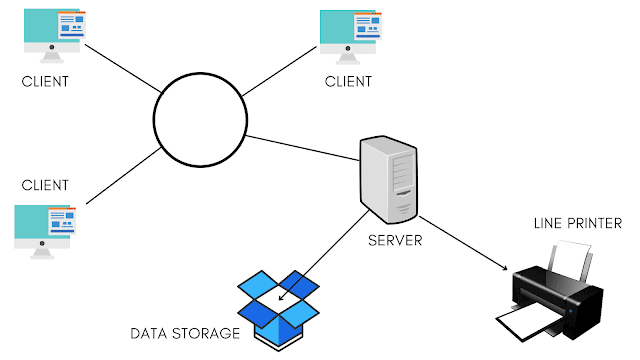 In LAN terminology, such shared devices are called servers. in a typical LAN-based shared-device processing, these PC’s requests are usually limited to services related to shared files or print processing. For example, a common file can be read by several PCs, and some report pages can be sent by multiple PCs to the same printer.
The obvious drawback of such an approach is that all application processing is performed on individual PCs and only certain functions (print, file I/O) are distributed. therefore, an entire file has to be sent to a PC that issues a READ request against this file. if the file has to be updated, the entire file is locked by the PC that issued the update request. Examples of shared device processing that allow a local area network to have a system dedicated exclusively to the file and/or print services are Novel’s NetWare and Microsoft’s LAN Manager.
The Client/Server processing concept is an extension of shared device processing. local area networks grew in size and number of supported workstations including a file server and print server. Gradually, these servers became capable of serving a large number of workstations. at the same time, the role of the workstations was also changing. the workstations were becoming clients of the servers. the main reason for the change was that in a large LAN environment, sharing of file and print services among the workstations in a LAN group represented only a fraction of a typical application.
The significant part of the application functionality was also a good candidate for sharing among LAN users. therefore, some of the application processing was distributed to a new server. the server that receives requests from applications running on a workstation (clients) and processes them for each of its clients. in this concept, application processing is divided between the client and server. The processing is actually initiated and partially controlled by the service requester client. both client and server cooperate to successfully execute an application. database servers such as Sybase or Microsoft SQL servers are examples of the client/server processing environment.

TCP/IP is supported by many network operating systems NetWare is a popular network operating system and it also supports TCP/IP protocol. NetWare TCP/IP refers to the collection of NetWare Loadable Modules (NLMs) that add support for TCP/IP onto the NetWare server. Routing can be enabled, as can RIP (Router Information Protocol) to support that routing. One advantage of TCP/IP support in the NetWare server is the ability for IPX (Internetwork Packet Exchange) to travel across a TCP/IP-only network by using IP (Internet Protocol) tunneling. The NetWare TCP/IP suite of protocols is a necessary foundation for all NFS (Network File System) products for Novel. The NetWare TCP/Ip suite provides both the 4.3 BDS Unix socket interface and the AT&T Streams TLI (Transport Layer Interface).
With the release of InternetWare, the TCP/IP support at the NetWare server becomes even more important. the web server relies on TCP/IP to communicate with the Internet and intranet clients. NetWare IPX clients using the IPX/IP Gateway require TCP/IP at the gateway server to provide the TCP/IP protocol stack necessary for connection to TCP/IP host, either locally or on the Internet.

Client-Server architecture distributes processing between clients and servers on the network. Clients request information from the servers. The servers store data and programs and provide network-wide services to clients. This arrangement exploits the available computing power by dividing an application into two distinct components – a front-end client and a back-end server. 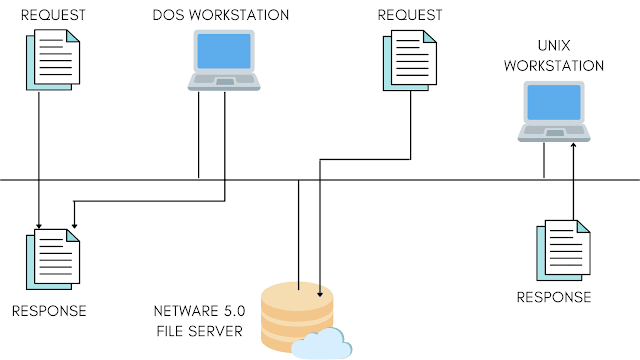 The above-given image shows the client-server model for the NetWare network operating system. NetWare OS uses a model called the file server model. In this model, the application and the data reside on the file server. when a network user needs access to the application and the data both are loaded over the network onto that user’s workstation.
In the client-server model, the load is spread out more evenly. Typically, the client program running on a workstation or PC is responsible for all interactions with the user. this interaction may be through a command line, a menu or a graphical user interface such as Windows 9.X or the IBM OS/2 Presentation Manager. the client’s user interface is often called the front end whereas the server program is called the backend.
Although a great deal of information can be shared with this model, each workstation must be powerful enough to run the application. sending the application and data from the server to the workstation puts a load on the network. the server program runs on another computer in the network. this machine may be a NetWare server. the server program listens on the network for a request from a client. when it receives a request, the server decodes the messages, performs the requested action, and returns the result as well as any error codes. the client program receives the result and displays it to the user through the user interface.
A common example of a client-server application is a multiuser SQL database server running on a NetWare 5.0 server. A client Windows 9. X program accepts a query from the user and sends the request to the SQL server. the server queries the database (which resides on the server) and packages the result for return to the Windows application.

Windows NT 4.0 is a lot more than just a new version of Windows NT with the Windows 9.X interface. with enhanced network features such as built-in remote access, administrative wizards, network management, support for NDS (NetWare Directory Services), and an Internet server plus the ability to work with all the major network protocols, including TCP/IP, IPX, and NetBEUI Windows NT 4.0 is a great tool for any network administrator.
One of the biggest additions to Windows NT Server 4.0 is the Internet Information Server (IIS). IIS includes both a Web server and an FTP server and is easy to install and use. It also adds remote management necessary for most internet servers. Windows NT Workstation 4.0 includes Peer Web Services. this is a scaled-down Internet/intranet server based on IIS.
Windows NT 4.0 includes the NDS (Netware Directory Services) driers that let you connect to a NetWare 4x directory tree, so you can manage all of your NetWare servers and clients from a PC running Windows NT. Windows NT 4.0 also executes your NetWare login script, a feature that has been missing in the earlier version. the administrative wizards are probably the most useful additions to Windows NT 4.0. they can walk you through common network tasks, such as adding a user or printer or sharing your PC’s resources.

Like Windows NT 4.0, the new version of OS/2 wrap includes a new interface complete with pop-up menus and a taskbar. the folks at IBM didn’t stop there, however, this new release includes powerful network features that allow you to connect to almost any network, dial in from a remote location, surf the internet, send and receive an e-mail, and manage all of your network servers.
OS/2 Warp was, from the start, designed to be a universal network client, and as a result, it works with the major network protocols, including IBM Personal Communications/3270, which allows you to connect to a Mainframe using TCP/IP. as Windows NT 4.0, OS/2 Warp 4.0 works with both NDS and Binary database. the built-in peer-to-peer networking is great if you need to connect multiple desktops together in a workgroup environment.
Unlike Windows NT 4.0, the new OS/2 Warp does not include an Internet server, but it does have a built-in web browser and FTP client. the web browser allows you to surf the Internet or connect to your company’s intranet, and the FTP client allows you to drag and drop files between your local hard disk and the remote FTP server. these utilities, coupled with the Lotus Notes e-mail client, should fulfill most of the Internet or intranet needs.
Also, read
Digital communication, engineering subjects Tags:Digital communication, engineering subjects