Microprocessors have been one of the most used methods of incorporating intelligence into automated devices. Their general-purpose nature, speed, and size have made them one of the most common components in Computer Science Engineering. It is, therefore, necessary to develop a good understanding of their operation and how they can be used as building blocks for automated systems and control applications. A microprocessor is a controlling unit of a micro-computer, fabricated on a small chip capable of performing ALU(Arithmetic Logical Unit) operations and communicating with other devices connected to it.

The microprocessor consists of an ALU, a register array, and a control unit. ALU performs arithmetical and logical operations on the data received from the memory or an input device. Register array consists of registers identified by letters like B, C, D, E, H, L, and accumulator. The control unit controls the flow of data and instructions within the computer.

Block Diagram of a Basic Microcomputer 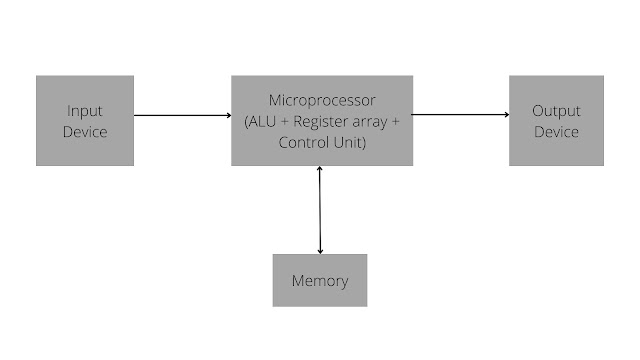 This block of the microprocessor is responsible to perform arithmetic operations addition, subtraction, etc., and logical operations (AND, OR, EX-OR, Complement, etc). ALU is the unit that decides the capability of any microprocessor.

The microprocessor consists of various registers. the collection of registers is named register array. these registers are primarily used to store data temporarily during the execution of a program. same registers are used to hold the input and output data and are accessible to the user through the instructions.

The control and timing signals are generated by the control unit. it controls the flow of data between the microprocessor and others like memory and peripherals.


The microprocessor takes the instruction and data from the memory and input unit respectively. after processing, the result is given to the output unit. the main processing job is done by the microprocessor but this, it requires the association of memory and I/O units. there are three basic components that comprise a microprocessor system to perform a given task. 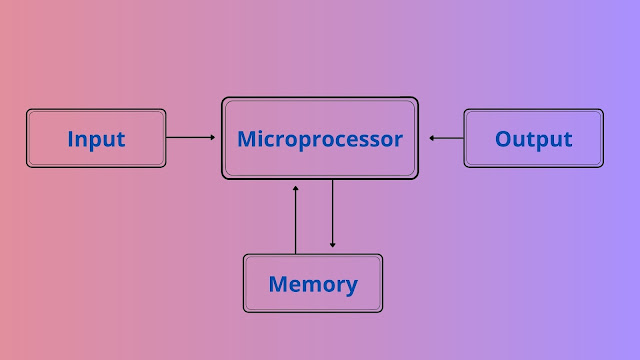 The microprocessor follows a sequence: Fetch, Decode and Execute. 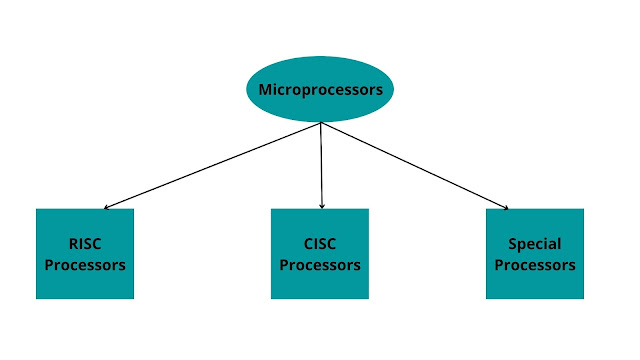 RISC stands for Reduced Instruction Set Computer. It is designed to reduce the execution time by simplifying the instruction set of the computer.

These are the processors which are designed for some special purposes. For example – Coprocessor, I/O Processor, Transputer(Transister Computer), and Digital Signal Processor.

The advent of microprocessors was accidental. Intel corporation founded by Moore and Noyce in 1968 was initially focused on creating semiconductor memory. Ted Hoff, an intel engineer felt that a general-purpose logic device could replace the separate multiple components. this idea led to the development of the first microprocessor.


Federico Faggin and Stanley Mazor realized this idea in hardware at Intel. the result was the intel 4000 family comprising the 4001 (2K ROM), the 4002 (320-bit RAM), the 4003 (10-bit I/O shift register), and the 4004, a 4-bit central processing unit (CPU). Intel introduced the 4004 microprocessor to the world in November 1971. It was not truly a general-purpose microprocessor as it was basically designed for a calculator.


The continuous development in integration technology made it possible to accommodate more and more gates in a single chip. as a result, it is possible for a small microprocessor chip to perform more operations with a high degree of complexity. intel after its first microprocessor, subsequently came out with 8008, 8080, 8085, 8086/88, 80186/188, 80286, 80386, 80486, and Pentium series of microprocessors, each with more capabilities than its predecessor. The below table gives the intel’s journey of microprocessors from 4004 to Pentiums.