Skip to content
According to history, about 600 years before Christ, Thales, a resident of Miletus in the country of Greece, observed that when amber is rubbed with fibrous material such as wool, it attracts small pieces of paper, pieces of straw, etc.
The grand name of amber was electron and it was on this basis that the word electrics was established. In the same way, when rubbing a glass rod with silk and rubbing of ebonite rod with a cat’s skin, the same quality is produced in them. In such a state, these substances are called charged. In the above cases, the charge in the substances is generated due to the process of the arsenal, so this type of effect is called the friction electric effect.
The physical means of a substance being electrified by friction means that the substance exhibits different behavior from the normal and it can be said that the substance has acquired a special property. This characteristic property of electromagnetic material is called electric charge. Electromagnetic materials are also called charged substances.

A charge is the inherent property of the original particles that make up the substance, that is, it is the property that arises automatically due to the existence of these particles. Although no simple definition of charge can be given, it is understood only based on its effects, yet it can be said that the charge on a substance is one. Such is the characteristic (qualities) due to which it generates or experiences electric and magnetic fields.
Example: Rubbing a glass rod with a silk cloth causes the glass rod to become positively charged and the silk (silk cloth) becomes negative. 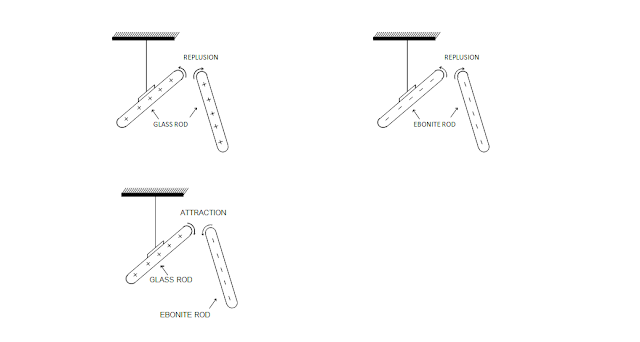 If you rub the glass rod with silk cloth and hang it freely on the stand with a thread and bring another glass rod near the first rod after rubbing it with silk cloth then the hanging rod is removed.
Similarly, if rubbing the rod of ebonite with the cat’s skin and bringing it to another hanging rod is rubbed in the same way, then the hanging rod is removed. But if rubbing an ebonite rod with cat skin and hanging it freely and rubbing a glass rod with silk cloth and bringing it near the ebonite rod then the ebonite rod is attracted towards the glass rod.
The same kind of charge is present on the two glass sticks which are rubbed with silk. And thus charges of similar nature are repulsed mutually. Similarly, both the sticks of ebonite, which are rubbed with the cat’s skin, also have charges of similar nature and repel each other. But the attraction in charged rods and glass-charged rods of ebonite indicates that charges of opposite nature are present on them.
The positive and negative names for electric charges were proposed by Benjamin franklin. Franklin had voluntarily considered the charge generated on the glass when rubbing the silk with a silk cloth. The findings from the experiments conclude that “charges of the same nature are repulsed and charges of opposite nature are attracted”.
So the glass Other charged objects repelled by the positively charged rods will also be positively charged, and such charged objects that are attracted to the positively charged rods will be negatively charged.
civil engineering, engineering subjects Tags:civil engineering, engineering subjects