Skip to content
Some of the semiconductor chips are needed to connect peripherals to the system bus. these chips are called interfacing devices. all peripherals and memory share the same bus, however, the microprocessor communicates with only one peripheral at a time. for the proper functioning of this system, tri-state logic devices are necessary. 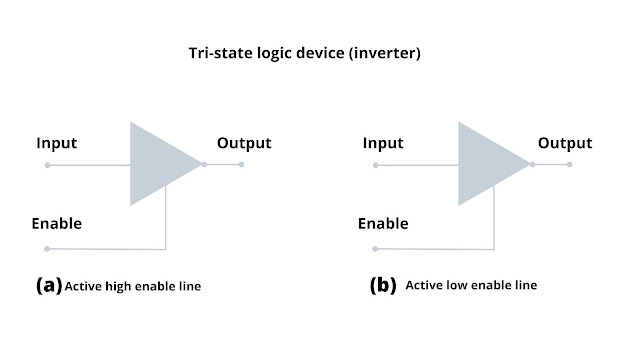 Whenever a system is designed, a number of devices are connected to the output of one digital device. if the output current of the digital device is not sufficient to drive other devices, the current capacity of the output of the digital device has to increase. the buffer is used to increase the driving capability of a digital or logic device. it is also known as the driver. a buffer increases the output current.
Sometimes, a change in voltage levels is required. this is also achieved by a suitable buffer or driver. a buffer is symbolized by a triangle as shown in the below image. for an inverting buffer, a bubble is put at the output point of the triangle. a tri-state buffer has one additional line named enable. when enable line is low (for active low case), the circuit behaves as a buffer, otherwise, it stays in the high impedance state.
In microprocessor-based systems, the buffer is used to increase the driving capability of the data and address bus. since the address bus is unidirectional, a unidirectional buffer (example – 74LS244) is used however data bus s bidirectional, a bidirectional buffer (example – 74LS245) is used. 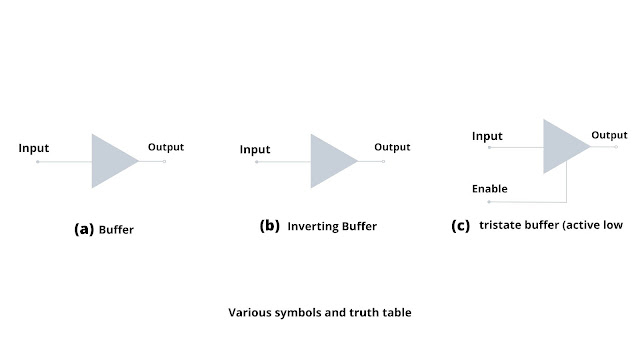 There are various buffer driver ICs are available. some of them are shown in the below table.

The encoder is a logic circuit that provides the appropriate code as the output for each input signal. the examples of encoder ICs are:
The hexadecimal to binary encoder can be realized using two 74LS148 ICs and a data selector. the IC 74LS148 is also known as a priority encoder. it has eight inputs and one active low enable signal. it has five output signals (three are encoding lines and two are output enable indicators). when the encoder is enabled and one line, for example, line 3 goes low, the output 011. if two or more input signals are activated simultaneously it ignores the low priority inputs and encodes the highest priority input. the output of this encoder (IC 74LS148) is active low means output will be inverted. when input line 3 is active the output is 100 instead of 011. 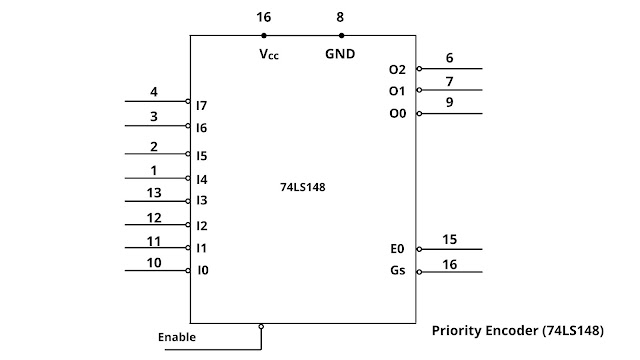 The microprocessor-based system or any other digital system uses binary numbers for its operations. these understand only the information composed of 0s and 1s, whereas the user is allowed to use decimal numbers. the decoder is used to decode the information from binary to decimal. the decoder is a logic circuit that identifies each combination of the signals present at the input. the decoding is the reverse process of encoding. examples of decoders are BCD to decimal decoder, BCD to segment decoder. the logic diagram of the IC 74LS138 is shown below image. 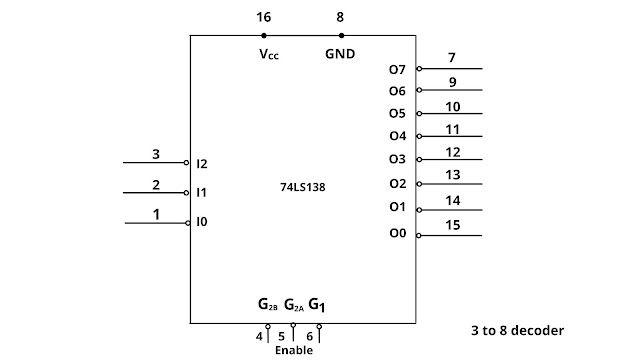 A flip-flop is the basic memory unit. a flip-flop in its simplest form is called a latch. it is a 1-bit memory element. it stores logic ‘0’ or logic ‘1’. the latch is used as a temporary storage device. for the temporary storage of n bits, an n-bit latch is composed of a number of 1-bit latches, then the n-bits of a binary word are transferred to the latch in parallel. 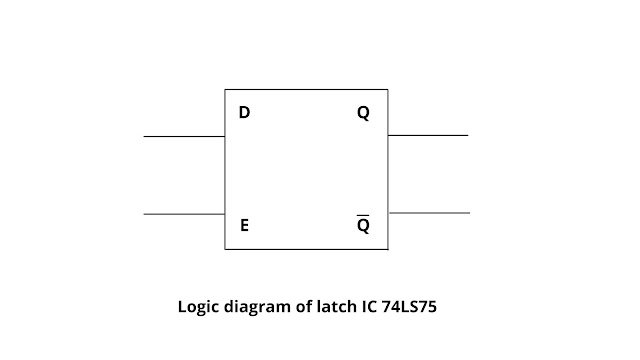